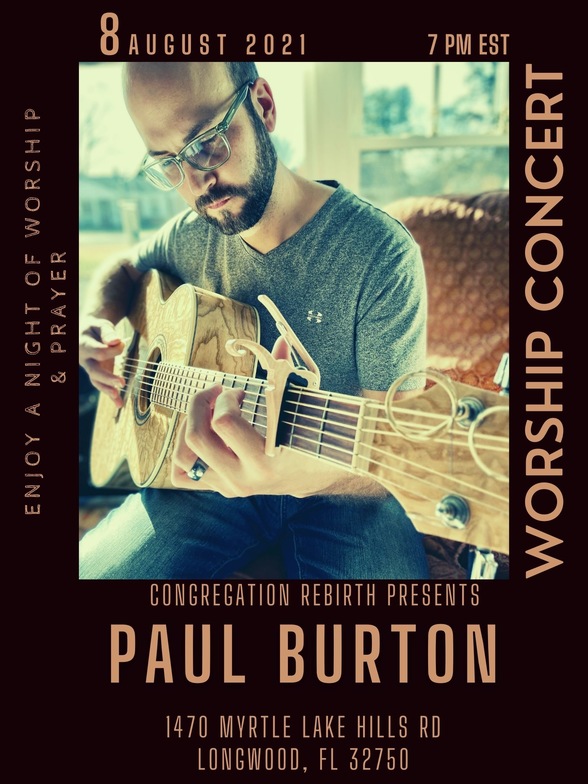 Save to your Calendar

Take the opportunity to come together as the community of Messiah for this great event with Paul Burton in Concert from Virginia, USA celebrating Rosh Chodesh (head of the month) as we enter into the month leading to the High Holidays! What more than to come together and lift up the name of Yeshua!

Paul Burton is a Messianic Jewish singer songwriter and multi-instrumentalist from Roanoke, Virginia. He serves as a worship leader and cantor at Hope of Israel Congregation in Roanoke. Paul works at a local hospital as a first assist nurse in the operating room, and is recording his second album. He met his wife, Taharah, at a Paul Wilbur concert in Jerusalem, Israel in 2018. They have a daughter together and are expecting their second child in December.Testimony of Ministry:Paul has always been naturally gifted with music, playing violin since he was 5 years old, and picking up other instruments along the way. He pursued a music degree at Philadelphia Biblical University, but the Lord had other plans. He then enrolled in nursing school and worked in the ICU and cancer ward. During his shifts in the cancer ward, he would keep an instrument in his car and play for patients who were suffering. Meanwhile, his adopted sister was suffering with a rare disorder, and in 2006, she was on her death bed at age 22. The Lord revealed to her many things while she was suffering, including correct medicines for healing, a second daughter to adopt, and Paul’s ministry with music to those who are suffering. During many of his sister’s encounters with the Lord, Yeshua (Jesus) said Paul would be a famous nurse, he would bring healing to many through music that the Lord gave him, and he would write songs for those who are suffering. Through his life, Paul has had a front row seat watching loved ones and strangers suffer through physical, emotional, and spiritual trials. And he has seen the goodness of the Lord as God brought physical and spiritual healing to many. As a servant of the Lord, Paul desires to write what the Lord gives him, and allows his music to be the melodies the Lord puts on his heart. God has given many songs to Paul during these times of ministering. For instance, Adonai is Good (Psalm 25) was written in the corner of his sister’s bedroom while she lay on her bed praying for comfort and relief. Adonai is His Name was written during a time of intense spiritual warfare his family was fighting, and it became the fight song (and victory song) for the family. Others in his community have asked him to play during times of struggle and have seen the Lord move in ways to bring peace and wholeness. Now, 15 years later, God has refined his musical skills and spiritual ears to hear and discern what to play, and how to pray for those who need to find their way into the presence of The Father. Paul Burton’s calling is to bring people to the Lord through worship, and let the Lord handle the rest.

Expectation: We expect the Lord to do what He does best - meet people where they are and speak to their hearts.

Is anyone among you in trouble? Let them pray. Is anyone happy? Let them sing songs of praise. Is anyone among you sick? Let them call the elders of the community to pray over them and anoint them with oil in the name of the Lord. And the prayer offered in faith will make the sick person well; the Lord will raise them up. If they have sinned, they will be forgiven. Therefore confess your sins to each other and pray for each other so that you may be healed. The prayer of a righteous person is powerful and effective. James 5:13-16

We do ask that you RSVP as we have limited seating! A love donation/offering will be taken up for Paul and an offering will be raised to host more events bringing together the Messianic Jewish Community in Orlando/Central Fl.

Subscribe to receive email updates with the latest news.